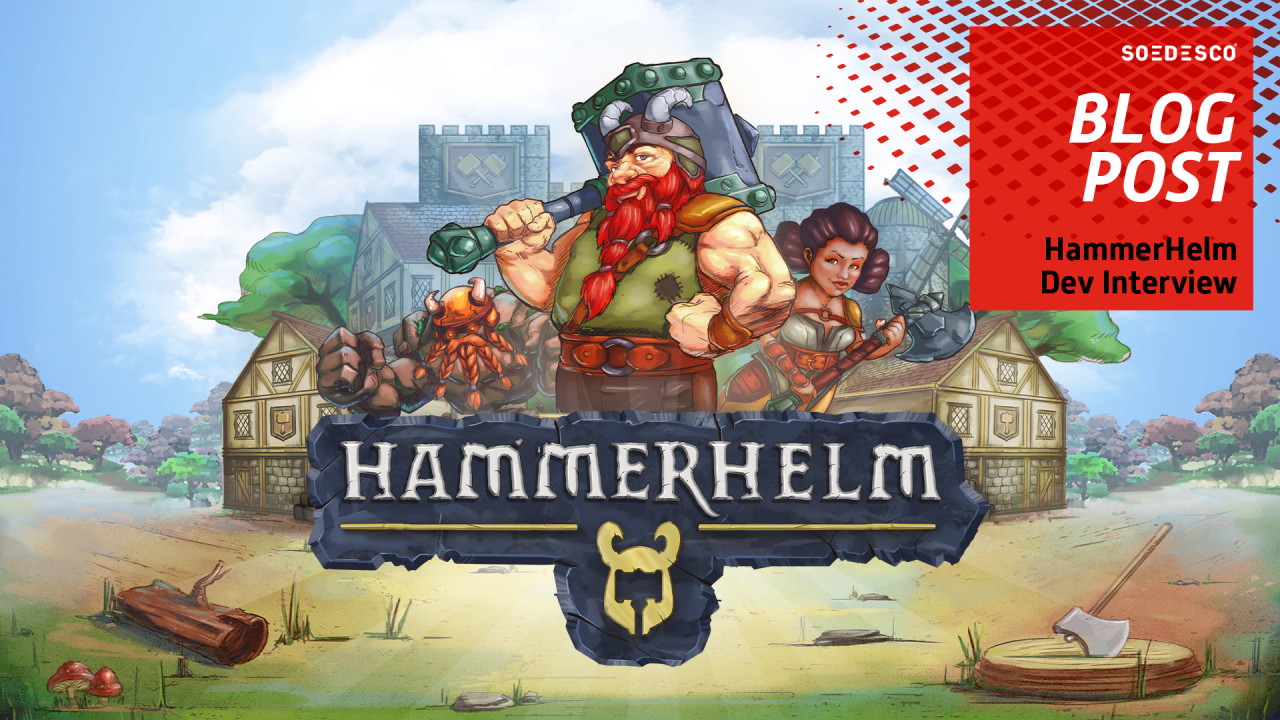 HammerHelm is a lively RPG that combines third person adventuring with strategic city building. You play as a dwarf who got banished from their homeland for believing that dwarves can live above ground. You decide to build a new town under the sun and clouds that will attract other dwarves who share the same vision. As their leader, you have to keep the townspeople safe and happy by completing quests, crafting items and fighting off enemies.

HammerHelm is currently in Early Access on Steam where it receives weekly updates from Jonathan Hanna. He created development studio SuperSixStudios and as the only developer, he started his HammerHelm project 5 years go. We recently had a chance to sit down with Jonathan to discuss his motivation behind the game, his learning curve over the years and his vision for HammerHelm.

Curious about the origin stories of Monster Crown, Kaze and the Wild Masks or Dog Duty? We've done interviews with the development studios of these games as well.

Could you tell us a bit more about yourself? Where are you from and what are your interests?

My name is Jonathan Hanna. I got my start in computer gaming and coding when my dad sold his antique train sets to buy the family our first computer in the early 1980s; a Commodore 64. Ever since then, all I’ve wanted to do is make games. I’ve been in the video game industry for a bit over 20 years, as a Community Manager, Game Designer, and Producer. I've worked for several companies, such as Origin Systems / Electronic Arts, Sony Online Entertainment and Disney. I also had the pleasure of working on games like Ultima Online. HammerHelm is the first game I made on my own. I still work full time in addition to supporting HammerHelm and I’m very lucky that the folks I work for are super supportive of my work on the game. Aside from making video games I enjoy pen-and-paper games, painting miniatures, and spending time with my family.

How long have you been walking around with the idea of making HammerHelm and when did you start to develop the game?

Growing up, I enjoyed playing some of the classic RPGs such as Ultima and The Bard’s Tale. This really sparked my interest in RPGs and I always wanted to make one, even as a kid. So, I guess you could say HammerHelm has been bouncing around in my head for 40+ years. But I think the game as it exists today really coalesced as an idea about 5 years go.

What moved you to make a game like HammerHelm?

HammerHelm actually started out as an RPG on mobile. I originally started working on it because I wanted to learn more about the tools being used in the industry as I wasn’t really doing any hands-on development anymore. I never really expected to make a game out of that work and I expected even less that I would create something other people would want to play!

After about 6 months of working on the mobile game, I switched it over to a PC game and started adding the town management elements. Most of the features were driven by a desire to learn… Can I make an inventory system? How about some NPC AI? Etc. Roughly a year later, I realized that I could put all of the stuff I had built into a cohesive game and HammerHelm started to take shape.

ideas from other games did you bring with you into HammerHelm? Did playing these games also influence you to do things differently?

Town and city building games have had a big influence on HammerHelm of course. I love city and town building games, but I always felt like I wanted to interact with the towns I was building and the townspeople that lived there. HammerHelm was really born from that. Originally the game was just an RPG set in a town, but as I worked on it more and continued to play town builders, I found myself wanting to build the town too.

What does HammerHelm have to offer that sets it apart from similar RPGs?

The town building! There aren’t many RPGs that let you build a town and then use it. Besides that, you also get to interact with the townspeople living there as part of your story and progression. So it really takes its strength from the balance between town building and third person adventuring. Furthermore, I feel like HammerHelm also isn’t a super hardcore game. It can be challenging and there is a lot of depth, but my goal has always been to make a game that is relaxing to play.

What are the most significant changes about the game since you initially started this project and why did you decide to make these adjustments?

After launching the game in early access, the two big things I focused on were deepening the town aspects of the game and upgrading the art. It was at this point that HammerHelm stopped being a solo project as I found artists who worked through contracts on everything from new characters and monsters, to new foliage. I’m still the only person working full time on the game, but HammerHelm wouldn’t be where it is today without their fantastic work! I’ve also add a bunch of more quests and I will continue to add more.

Originally the town part of HammerHelm was kind of secondary to the questing and combat, but it became apparent very quickly that players wanted more from their town. So, during the first year after launch, I added all kinds of things like additional buildings, new NPC jobs, NPC traits, resource tracking, and a host of other enhancements. I don’t want HammerHelm to become a hardcore simulation game, but adding those elements made the town feel more alive and more interesting and I believe it made the game better as a whole. I think the game has a nice balance between town-building and questing. They complement each other and build off of each other better after those updates.

What is the most rewarding part about developing this game?

The most reward thing is also the scariest – having people play the game and give their feedback. After over 3 years of development, I had no idea what people would think of the game. Did people even want a mash-up of town building and RPG? It’s not like I did any research or anything like that, I just made a game that I wanted to play. HammerHelm has found a wonderful and supportive community and I couldn’t be any more thankful for that. I love getting feedback, even critical feedback, because it comes from a place of wanting to see the game get better. When people buy your game they aren’t just giving you their money, they’re also giving you their time. So I figure if people are willing to spend their spare time to play my game, the least I can do is give my time right back to them. I try to update HammerHelm at least once a week, sometimes more often. I also try to be as active as I can on the Steam forums and Discord. Taking the feedback from the community and adding it to my own development plan is a lot of fun.

" I don’t want HammerHelm to become a hardcore simulation game. I think the game has a nice balance between town-building and questing"

The community. There are lots of things I like about the game itself, but the HammerHelm community is my favorite part of this. The game has gone in directions that I would never have imagined when I was doing this alone. Now I have a bunch of people playing and giving me feedback and it feels great. While it’s true that I have my own vision for the game, there have been quite a few times where the community feedback moved the game in a direction I wasn’t anticipating. For example, I recently added a feature that looked at both your personal inventory and your town storage combined together when crafting or building. Prior to this you’d have to go to the storehouse and either grab or drop off the resources. I was against making this change for a long time because I liked the idea of moving the resources around, but eventually realized the players were right, and I needed to stop being stubborn about it. I love that. After adding it… yeah, it’s way better that way.

Are there any Easter eggs or fun references to other games or series hidden in the game?

One thing that I imagine very few people will recognize is an Easter egg that goes back to my time working on and playing Ultima Online. All of the job buildings have a logo on their store signs, so an Armorsmith has a helmet and an Alchemist has a potion, etc. The logo for the tavern though is a keg and an anchor. In Ultima Online, the meeting point for the folks I played with was a tavern called the Keg and Anchor. I have a lot of really fond memories from those times and it was fun to be able to take some of that and put it into HammerHelm.

"There are lots of things I like about the game itself, but the HammerHelm community is my favorite part. I have a bunch of people playing and giving me feedback and it feels great"

If you were to start developing HammerHelm again from the beginning, what would you do differently, knowing what you know now?

In my personal experience, it’s not so much about the beginning, but about a year after I started working on the game. I probably should have taken stock of what I had and rewrote a lot of the systems. As I mentioned earlier, I was learning while making HammerHelm and going back and refactoring some of that old code would probably have helped speed things up later down the line. Now I do that a lot when I update the game and it is fun to sometimes look at code from 5+ years ago and wonder what the heck I was thinking when I wrote it that way!

Do you have any pro-tips for new HammerHelm players?

Absolutely. Avoid taking Dwarves who have the “slow” trait unless you plan on using them as a shopkeeper. If they’re responsible for getting resources, the slow trait makes a big difference, especially in the early game!

HammerHelm is currently in Early Access on Steam. With weekly updates, the RPG is planned to have more quests, features and overall content until its full release. Your feedback can greatly influence the direction that HammerHelm takes. This has already resulted in a massive update, which added a lot of new resources, décor and structures among others. We hope to see you on the HammerHelm Steam Page!