From action figures to Real Time Tactics game; How Dog Duty came to be

From action figures to Real Time Tactics game; How Dog Duty came to be 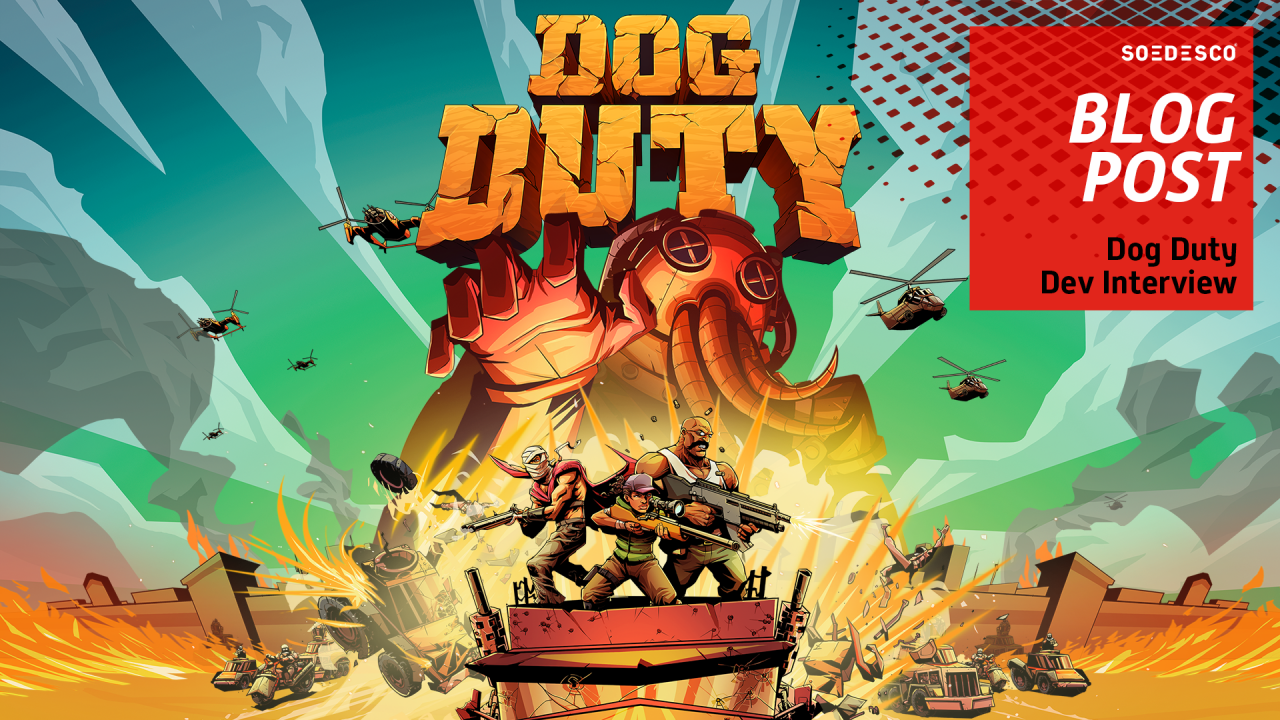 A fast-paced, action-packed Real Time Tactics game in retro looking 16-bit style, that’s how Dog Duty can be best described. The game is easy to pick up and play, filled with fun references and offers lots of ‘chaotic’ gunfights. You control a squad of three characters while you take it up against the evil octopus army, destroy their installations and take down the octo-bosses. In Dog Duty, you can ride freely throughout the world and fight on top of your moving vehicle. Your mission is clear: destroy the enemy outposts and defeat the wicked bosses so you can get to the treacherous Octopus Commander and let him know who’s boss.

As of now, Dog Duty is available on Nintendo Switch™, PlayStation®4, Xbox One and Steam®. After six years of development and an Early Access period on Steam, Zanardi & Liza are ready to release their game out into the world. Leonardo Zimbres, founder and lead developer of Zanardi & Liza, sat down with us to look back at where it all started and how his vision for the game was realized.

Curious about the origin stories of Monster Crown, Kaze and the Wild Masks or HammerHelm? We've done interviews with the development studios of these games as well.

Could you tell us a bit more about yourself? Where are you from and what are your interests?

Hi there! I’m Leonardo Zimbres, from Brasilia, Brazil. It’s difficult to look back and summarize what my history is. I was a bit of a somber and bored kid in the 16-bit era that discovered the meaning of life through video games, action figures, cartoons and such. I had several different interests growing up, from music and electronics to architecture.

As I got older, I finally decided to try gaming head-on. I used my web background to enter the flash gaming scene. After that, I fell in love with the gaming world, which prompted me to try out programming. Together with my wife I created the development studio Zanardi & Liza. From there, I started working on Dog Duty, which is my, and the studio’s biggest work so far. Aside from this, I work part-time as a teacher. I teach computer programming; the introduction and object oriented programming.

How do you experience the game development scene in Brazil?

When did you start developing Dog Duty?

The concept, the scratch? It’s difficult to say, but I think it was about six or seven years ago. It went pretty quick in the beginning. I had the idea of making a simplified base defense game with a playable soldier, so that’s what I started working on. Then, when I watched old movies such as MadMax2 and the animated GI Joe movie, I decided to scrap that and work on something that deals with strategy and comrades in battle. From this point, we did straightforward demo after demo and testing with the public at local events to try and find the best shape for our concept.

What are your biggest inspirations behind the game and how come they had such an appeal on you?

I wanted to create something authentic, something that I could do from my own personal experiences. I opted for the attempt of ‘telling’ my nostalgic memories through Dog Duty. These include playing old games such as General Chaos, Command & Conquer and Fallout Tactics. I also worked with fond memories I have of playing with action figures when I was younger.

I really liked working with these ideas because it was my vision to develop a simpler and straightforward action/ tactics game without over-complicated controls, like stance control, alert modes and so on. I think my memories lend themselves well for this. It was also a good experience to revisit my old self and to see how my nostalgic memories have led me to some great moments and also some not-so great moments, as I’ve faced difficult struggles as well.

What other ideas did you bring with you for the creation of Dog Duty?

Dog Duty was created from the conceptual idea of playing with action figures with your friends (and alone). In the game you fight enemies, help your friends and deal with decisions of supporting this friend here or hold the line there. That’s where the idea of commanding a squad in real-time started. There are some nostalgic titles that really spoke to us in this idea, games like General Chaos, Syndicate and Fallout Tactics.

On the other side, we were thinking about doing something closer to an ‘arcade game’. I mean, like shooter games such as the Old Mercs. And we wanted Dog Duty to include a layer of strategy map, something like Desert Strike where you drive around a big map and attack enemy positions, sabotaging the enemy forces as a whole.

In the game, you have to fight the evil octopus army. Why did you choose octopuses as the enemy?

Well, there is GiJoe's 'Cobra Commander', so I thought, what animal would be my own super villain? I had some ideas at first, but octopuses, they're special! These creatures are smart, strong and almost alien like. They look so interesting and it just intrigues me a lot. I mean, imagine how funny it would be to have an Octopus bragging about why he's magnificent and righteous? That's priceless to me! I had to bring this idea to life in Dog Duty.

How did you come up with thespecific art style for the game?

Ah, love at first sight. Or... maybe second sight. The original idea was to use pixelated sprites for the soldiers, but we swapped it for low-poly meshes, since 3D is more flexible for some things, like changing the weapon at the soldier's hand, etc. But, why the art style in general? The idea is to catch the 80s/90s vibe, so the old-school graphics was the way (and a pleasuring choice) to go. We love pixel art and low poly stuff!

What do you think is the strength of Dog Duty?

Well, Dog Duty is meant to be a straightforward Real Time Tactics game with simple controls and really easy to follow tutorials. You simply start the game and jump right in. It’s very accessible, even for people who aren’t necessarily familiar with such strategy games. Within a few minutes, you should be moving around wreaking havoc! It's fast-paced and action-packed, so you won’t find yourself having a dull moment here. Dog Duty also brings a lighthearted vibe with it. It’s filled with ‘silly’ and humorous dialogues and references that are meant to put a smile on your face.

What are the most significant changes about the game since you initially started this project and why did you decide to make these adjustments?

I’d say there were a lot of big changes on our iterations, but if I have to pinpoint one that had a significant impact on the game, I guess it would be the one where we decided to enable players to drive around the map with people on top of the vehicles, while firing and all. That was really one of a kind. Before that, the squad just went inside the vehicle and you’d simply drove away to the next destination, without any shooting action. This change also provoked us to make the game world more open.

Later in the process, we also implemented a new game mode called Horde Mode. SOEDESCO and SOEDESCO Studios have really given me a helping hand with it. With the Horde Mode, you can battle waves of enemies with your squad and see how long you’re able to survive. Funny thing, I initially had the idea of implementing this Horde Mode in Dog Duty, but somehow never got to it. Then, with the push that the guys at SOEDESCO gave me, I created a ‘challenging’ game mode besides the main story campaign. It’s a whole different experience outside of the main story.

What is the most rewarding part about developing games?

Hmm, I feel like Brazil as a whole does not know very much about game developers yet, so I have the odd pleasure of being an ‘alien’ in my own country and I really enjoy that. Nobody really knows what the heck you do for a living and that’s cool! Maybe it sounds weird to some, but I like being an alien in that regard.

But more seriously, it’s great to be a creator, and more so of games in particular! During my years of developing, I studied a lot about cold war, nostalgia, action figure playing and social rejection while working on Dog Duty. We get the chance to meet other fields, and employ the knowledge on your creation, and that’s awesome.

What do you like the most about Dog Duty?

I will sound redundant, but I really like the simplicity of it, the straight-to-the-point experience. It’s the freedom you have to wander the world and the openness to do what you want that really makes me love the game. Ah, and the unlockable characters of course! I’m really fond of them too.

Are there any Easter eggs or fun references to other games/series hidden in the game?

Ah, a better question would be how much? Cause there are a lot! The truck for example, was a reference to the last chase in Mad Max 2: The Road Warrior. Unfortunately, it suffered some heavy changes due to gameplay reasons. Another fun reference is on the first encounter with the Evil Octopus Commander. It’s inspired by the ‘Holy Grail’ Taunting scene from Monty Python. And there are a lot of other Easter Eggs and references in Dog Duty, but let’s keep them hidden for now, as they may pass the spoiler bar.

Do you have any pro-tips for new Dog Duty players?

Hum… there’s something I find odd, and that is pro-tips. Dog Duty was created to be enjoyed from start to finish, while playing in your own way. There are indeed techniques and procedures to get things done easier, but the proposal is to kick in and have fun. Maybe… well, use your special skills, mostly. And have fun doing things your way!

Curious to see what action awaits you in Dog Duty? Have a look at the new launch trailer and prepare to get ready for active duty! You can now pick up the Real Time Tactics game on Nintendo Switch, PS4™, Xbox One and Steam.