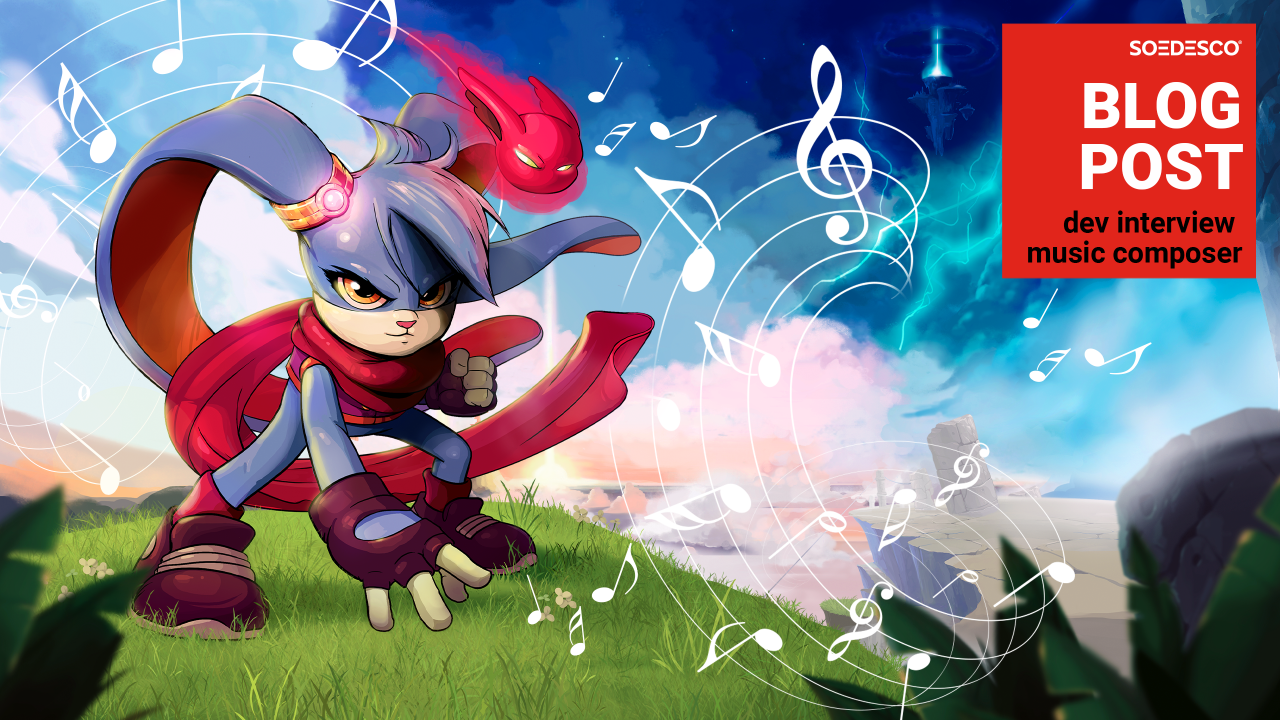 Composing music for a game is certainly an art on its own. It brings unique challenges in which the music composer needs to find a way to add extra dimension to the gaming experience. Especially when creating music for a game that draws its inspiration from classic retro platformers such as Donkey Kong Country 2® and Super Mario World®. Who doesn’t remember the classic tunes and catchy rhythms when playing their favorite games in the 90s?

Pixel-art platformer Kaze and the Wild Masks has nostalgia and retro style written all over it, which means the music in the game is no exception. With vibrant colors, lively characters and difficult platforming challenges, Kaze and the Wild Masks also offers energetic music that compliments the spirit of the game. But how did the music came to be and what does it take to make music for a retro-style game? To learn more about the creative thought process and the art of making retro style game music, we decided to sit down with game music composer and audio designer Paulo Bohrer of development studio PixelHive. He offers a unique view into the connection between music and gaming, and lets you in on his greatest inspirations for the music of Kaze and the Wild Masks. In our previous interview with PixelHive, we discussed the origin and story of the 90s inspired platformer.

‍So please tell us... Who are you, where are you from and  what are your interests?

Hi folks! I'm Paulo Bohrer, a music composer and audio designer based in the city of Porto Alegre, Brazil. I'm one of the co-founders of PixelHive, the studio behind Kaze and the Wild Masks, where I'm having lots of fun working on all the audio parts for this game!

I have and always had two big passions: music and games. When I'm not working I will probably be playing some games or studying music or practicing a musical instrument. The fun thing is that when I'm busy working I'm also actually involved with these exact same things, so I can't complain much about life ha-ha. Joking aside (kind of) I'm also really into sports (soccer, tennis), books (sci-fi, fantasy, textbooks), podcasts (miscellaneous) and eating a good meal.

"After graduating from high school, I attended two universities at the same time - coursing music in one and game development in the other."

How/when did you decide to make music for games in particular?

I always wanted to have a career where I could combine music/audio and games. When I was just a child, around 7 years old, I remember using a tape recorder in front of the TV to record music from my favorite games and then my piano teacher would learn them by ear and teach me afterwards. I've spent most of my teenage free time playing games and studying the guitar. After graduating from high school, I attended two universities at the same time - coursing music in one and game development in the other. Once I got my degree in music I went to specialize myself in Digital Music Production for Games in San Francisco, CA.

I guess you could say that I always had this goal in mind since I was very young and it has been amazing to make music and sound for games these past years.

How would you describe your personal connection with retro games?

I’ve been playing games for all my life and I’m a very nostalgic person in general, so yeah, I have a deep emotional connection with retro games. I feel that the games I played as a kid or teenager helped me to define who I am today. Nowadays we have a tendency of being sarcastic about everything and I think that the “good ol’ games” have a simplicity and positivity that can make you see things in a more optimistic (if not naive) manner. And to me that’s a good thing to remember once in a while.

What makes creating music for games so interesting for you?

The most amazing thing about game music and audio in general is that they are interactive by nature. You can't think of game music linearly as you would think for other types of media. The music should react and adapt to the game mechanics and game design direction. You can't predict what players will be doing with the controller on their hands, so as a composer you need to work on a set of "game rules" to decide how the music will behave to keep players' immersion. It is very unpredictable and challenging. Sometimes it results in a great piece of music that can feel perfect by itself, but it might not work at all when integrated in the game. It's not only about creating a great sounding tune. I find all those aspects pretty challenging and awesome.

"You can't predict what players will be doing with the controller on their hands, so as a composer you need to work on a set of "game rules" to decide how the music will behave to keep players' immersion."

What do you need to take into account when creating music for games?

Everything! Art direction, narrative, mood, gameplay, cadence, game genre, technical limitations, budget, good documentation, accurate references, high quality resources, deadlines, communication, etc. (not necessarily in that order). You also need to know that games are collaborative and that you shouldn’t expect to get things done on the first try. You’ve got to learn how to listen, iterate and improve yourself and your work based on feedback and teamwork.

What does it take for music to work well in retro style games, according to you?

Today game music - especially in AAA games - is much more interactive and adaptive to your feedback as a player. This is awesome, because the whole game feels more natural, like a breathing organism. You have loud peaks and quieter moments - it is a much more dynamic experience, and because of that a better story can be told and/or reinforced through music. Composers should find balance in what the game will demand for each gameplay moment - sometimes they will be able to go wild and write a “protagonist” music to the game, and sometimes they will need to step down and just offer music as a support role.

This is where working in retro games is so different in my opinion - music in retro games is about strong melodic themes above all else. It is about having great music to enjoy as if you’re listening to a more traditional linear soundtrack. Sometimes very simple, straightforward and catchy. For that to work well, the musical themes will need to be spot-on, not tiresome and extract the correct feeling of what’s visually on the screen.

Of course that was all a very simplistic approach from my part and there’s so much more to it than this... but we can talk more about this subject at another time.

"The musical themes will need to be spot-on, not tiresome and extract the correct feeling of what’s visually on the screen."

Which inspiration sources did you use for the music in Kaze and the Wild Masks?

For all aspects of Kaze and the Wild Masks we were very careful to work with references. We wanted to convey a very similar feeling from that of playing a game from the 90s. Talking specifically about music, I went over a lot of research on classic video game composers from that era to understand a little bit of what made them special. At some point in the development, I tried to recreate a few of my favorite songs just for practice (and to have some fun). Of course I didn’t want the game to sound like a copy of something preexistent but rather inspired by it - and there can be a very thin line between those. So in order to make the music more unique I’ve used my references as a guitar player to include some pop/rock electric guitar elements whenever possible. We also didn’t want the game to sound “chiptunish”, nor use low-quality/limited virtual instruments. So, we recorded some real instruments and went for the best quality samples we could get in order to get high quality audio while still maintaining the essential feeling of our esteemed references.

Some of my favorite game music pieces were a big inspiration for writing music for Kaze and the Wild Masks. I’m a big fan of David Wise, and his work. Especially Donkey Kong Country 2 and Donkey Kong Country Tropical Freeze - had a big influence on me. I’m also a big fan of Nobuo Uematsu and all his compositions for the old-school Final Fantasy titles (mainly from VI-IX) were what made me fall in love with video game music. The soundtrack of Journey from Austin Wintory had a big impact on me too when it was released, and reinforced my will of pursuing a career as a video game composer.

What is your favorite music piece from Kaze and the Wild Masks and why do you like it so much?

I think it’s probably the theme I wrote for the lava-themed levels. It is not a complex piece of music, but I really like the melodic passages and the percussive groove during the chorus part. It has a very common (and functional) folk eastern instrumentation to transmit the hot atmosphere, but I’ve also included some Brazilian elements to help with the wiggles.

"We wanted to convey a very similar feeling from that of playing a game from the 90s. Talking specifically about music, I went over a lot of research on classic video game composers from that era to understand a little bit of what made them special."

What is the most rewarding part about your job?

That feeling of mission accomplished when players are enjoying the game and grooving with the music; in my opinion the best feedback you can get as a game composer is that your composition summed up in the game's overall immersion. It’s not only about writing awesome music, but as your music contributes to the game experience. If you can do that and also have a soundtrack that stands out then you did a great job.

A digital and physical version of Kaze and the Wild Masks is currently in the works for Nintendo Switch™, PlayStation®4, Xbox One, Google Stadia™ and Steam®. The game is set to launch on March 26 with a digital edition. The physical edition will follow on May 25 for Nintendo Switch, PlayStation 4 and Xbox One. Curious to learn more about the game? You can read about the origins of the game in our first developer interview!